Do you know how pallet racking is measured? Maybe you need a to organise an install, reconfiguration or conduct repairs on the racking of your workshop or warehouse. But you don’t see the need for a s

Sometimes it can be a challenge to request a pallet racking quote over the phone or email. The language used between a racking supplier and yourself can vary. Thus, making it difficult to gain understanding between both parties.

With our step by step guide we take you through the correct method to measuring out your racking. Included is the terminology to use so that you can identify the components of your racking structure.

Steps to Measuring Your Pallet Racking

Many pallet racking brands are interchangeable. However, it is not best practice to combine different brands of racking.

Still not sure what brand your racking is? No problem, send us a photo of the Beam connection to the frame. Then we can determine that for you.

Bay Width is what is known as the length of a beam. The measurement of a Bay Width is taken between the insides of the frames. A Frame is the structure in which beams slot into.

With a new racking fitout of a warehouse or workshop, the pallet sizes you will be storing on the racking will determine the bay width you require.

There are many standard beam sizes available for many racking suppliers. As a guide many can supply any beam sizes between 1200mm and 3900mm. Standard sizes that we stock at Abbott include: 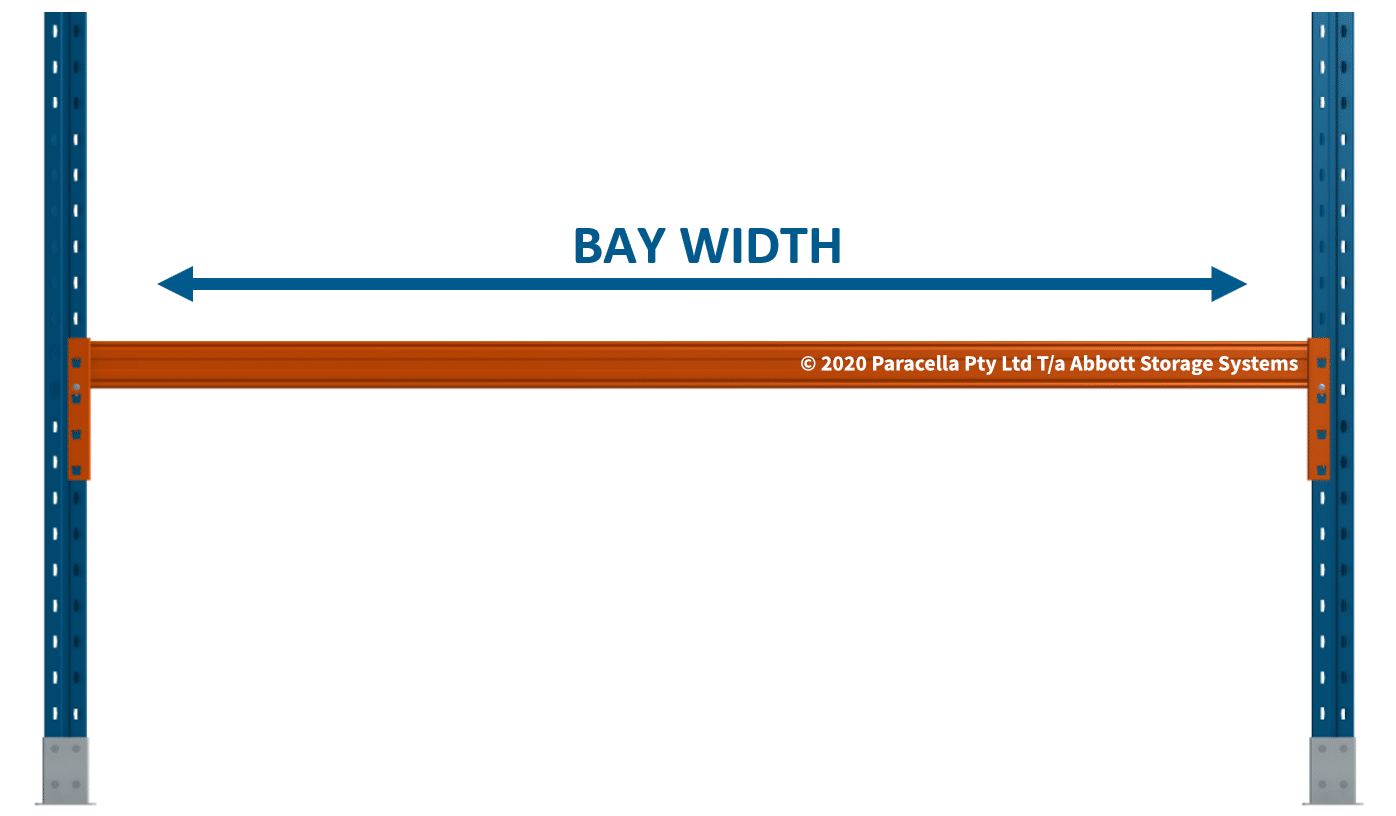 The pallet racking in your warehouse can handle the weights that are set out in the Safe Working Load (SWL) signs. These are on the end of your racking aisles. It is critical to adhere to these load limits. It is also known as Universally Distributed Load (UDL). To determine the load limit required, work out the weight of what will be placed on a single Beam Level. Which is two beams adjacent to each other, that form a level to store pallets on. For example having 2 pallets of 500kg to a beam level would require a SWL of at least 1000kg.

With a new installation of racks, this information can provide us with the specifications that you require of the beams. However, with a reconfigure or repair to racking it is more difficult and it may require a site visit to correctly determine the beam duty.

For a racking supplier to determine the Beam Duty they will require the depth and height of the beam. 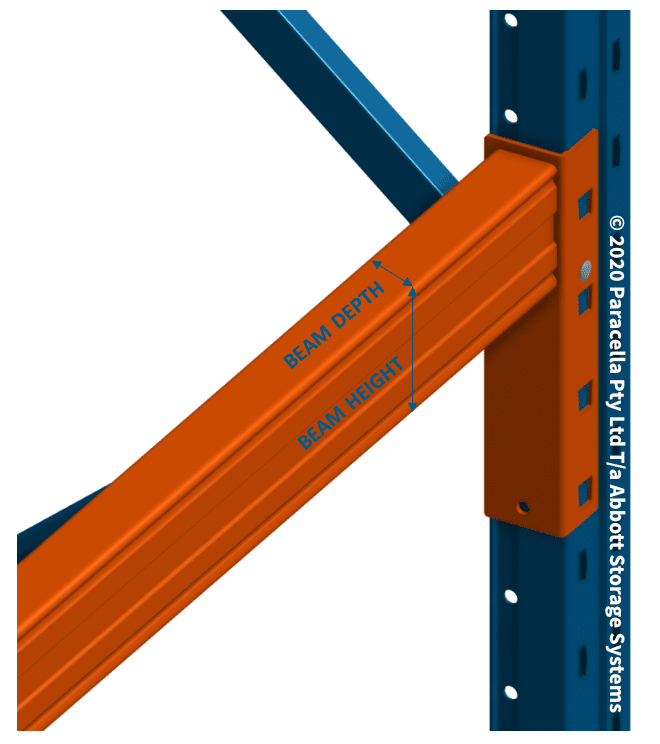 A Single Bay a of pallet racking consists of a two upright frames with beams connecting the two frames. The construction of a pallet racking Frame is from posts, uprights and braces. Beams run parallel to the floor and they slot into the beam slots of the posts.

Different racking suppliers have alternative ways to determine the depth and height of a pallet racking frame. Many manufacturers also have varying increments to the height of the frames.

In order to calculate the height of your frame, measure from the top of the Base Plate (which is what the frame sits on) to the highest point of the frame. To calculate the depth measure distance between the outside of the two Posts. A post is also referred to as an Upright, it is the two vertical parts of a frame.

The frame depth that you require is worked out by the pallets that you will store on the racking. Frame depths can range from 450mm to 1500mm.

A handy dimension to have on hand is the Bracing Pitch. This can impact the load capacity of the frame.

The next step of the process is to determine the configuration of the pallet racking bays. By now you have worked out your beam clearances and weight requirements and the frame sizing. Entirely dependent on the load limit you require it will indicate the number of beam levels you can have within a bay. From this you can then determine the duty of the uprights.

A pallet racking Bay is what is known as two upright frames with beams between them. The most important part of a bay is the height of the first beam level from the base plate. Differing the height levels of the lowest beam has an impact on the strength of the racks. The higher the first beam level is up the frame the lower the bay capacity.

Using your pallet sizes and the materials handling equipment in your warehouse, work out the Beam Pitch for each beam level. The beam pitch is the distance between the top surface of a beam to the top surface of the beam directly above it. 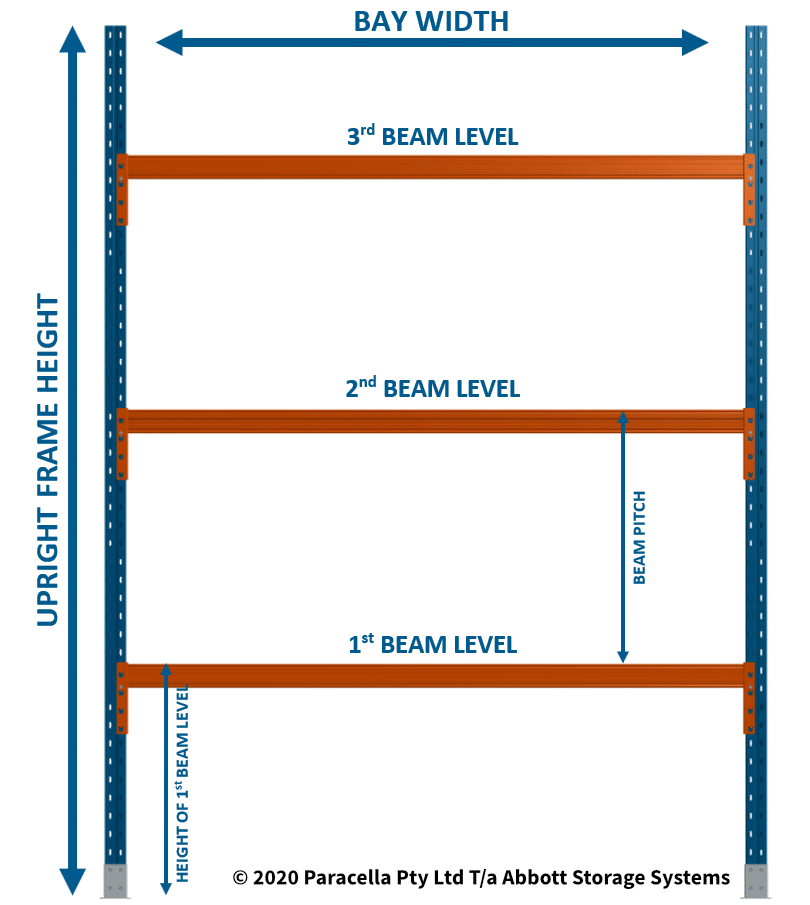 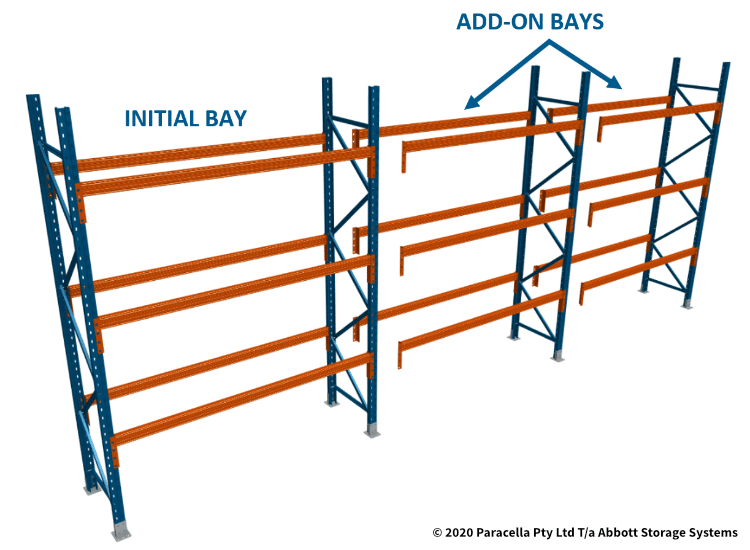 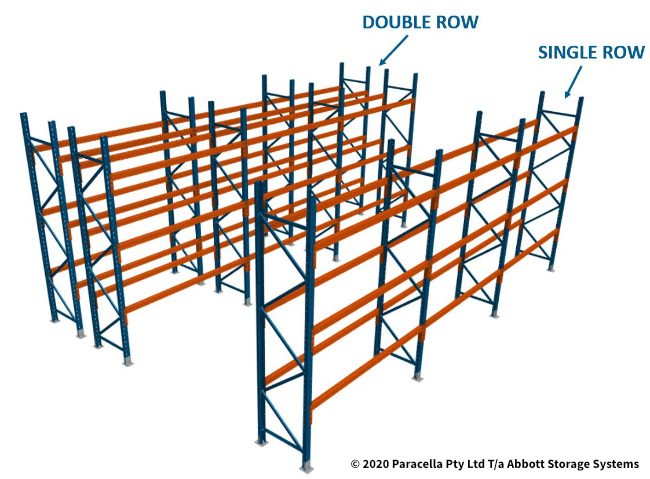 When a single bay has additional bays joined to it the original bay becomes known as the Starter Bay. An Add-On Bay is constructed from one frame and multiple beams, the beams join to the a side of the frame from the starter bay. As many add-on bay as you wish can be added to the starter bay, providing your warehouse length can take it.

By now you should know the basics of a pallet racking system and the components. Including Frames, Beams, Braces, Bay Widths and Racking Configurations.

Bear in mind a measure of the warehouse racking fitout is best through a design consultation session, which we offer free of charge!